Throughout much of the first half, the Sounders held solid possession and launched several shots on goal, but the lone goal came from Megan Manthey on an assist from Sydney Leroux. A great save by Hope Solo in the 41st minute kept the Sounders lead going into halftime.

A goal from Veronica Perez in the 48th minute put the Sounders Women up 2-0 early in the 2nd half. Colorado brought the score to 2-1 in 61st minute, putting pressure on the Sounders to maintain their lead. The Sounders held their ground and the score remained 2-1 as the whistle sounded the end of the game. 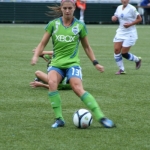