The Sounders Women played Seattle Pacific University this evening. Fresh off a narrow 2-1 win last week against Seattle University, the Sounders women look determined to carry on the good performance.
The game started off slow with both teams trying to establish a rhythm and maintain possession of the ball. The first real exciting moment came in the 5th minute when Rachel Mercik made an excellent run down the left flank and delivered a cross in the middle of the box which was cleared by SPU’s defender. Merely a minute later, SPU had a very similar chance having a cross into the box cleared emphatically. Both teams worked the flanks very well early on with a series of intricate passes. In the 9th minute, the Sounders Women put a few passes together by the top of the box, the ball was eventually laid off nicely to an oncoming midfielder who shot it narrowly over the bar. The Sounders Women continued to pile on the pressure. In the 12thminute, Sarah Cambell exhibited some quick feet with a great pull back beating her player and threading a pass to the player making a run forward had her shot saved by the goalkeeper.
Seattle Pacific University responded well in the 17th minute from a throw in which was played down the line and crossed low into the box. SPU’s striker got a slight foot to it and the ball was calmly collected by the Sounders goalkeeper. The Sounders Women came knocking on the door again in the 19th minute when Millisa Busque shot a loose ball deflected off a defender just inches off the crossbar. In the 24th minute the Sounders women played an excellent give and go from the top of the box, beating her defender, but her shot was closed in on by the SPU secondary who came in rushing to cover. SPU’s best chance in the half came in the 26th minute when they worked the ball well down the flank, crossed it high into the box, which met a wide open striker who volleyed it just over the bar. SPU started to gain a rhythm and establish a presence late in the first half. In the 33rd minute, the Sounder Women defense looked depleted as a SPU player run pass the right back into the box with ease, cut the ball onto her right foot and shot a curler towards the outside of the goalkeeper who had to be at full stretch to palm the ball away. Soon after, in the 43rd minute, SPU continued to push forward with an excellent tackle by Alexa who won the ball in the middle of the field and distributed it to the outside of her striker. She dribbler and shot the ball towards the near post which was saved by the Sounders goalkeeper.
The first half ended 0-0.
The second half started full of promise with an early goal merely two minutes after play resumed. The ball was played in from the flank and found a wide open striker for an easy tap in goal. SPU’s goalkeeper was at full stretch but did not manage to get to the ball. The Sounders Women added another soon after from a series of crosses into the box leading to a goal-mouth struggle which landed conveniently at the feet of a Sounders player who made no mistake in kicking the ball into a wide open net. In the 68th minute, SPU’s goalkeeper was called into action once again and delivered an excellent finger tip save to knock the ball wide. SPU took courage, never gave up and kept on pushing. With 15 minutes left on the clock SPU had multiple attempts on goal parried and blocked by both the Sounders goalkeeper and defense that turned up big to prevent an impending goal.
SPU had another chance go begging in the 84th minute from a corner kick. Alexa stepped up for the kick and placed it neatly to the back post which was met by the head of a teammate but unfortunately it went wide. The Sounders Women topped off an excellent performance with a goal in the last minute of play with some excellent dribbling skills and a powerful low shot into the bottom right corner of the post, beyond the outstretched arm of the goalkeeper.
The Sounder Women won 3-0.

The Sounder Women provide much promise with a good performance here today. With the W League looming in the periphery, they Sounders Women are starting to work together well. They have two more friendly matches here before the season opener as they continue to work on an upward trajectory. 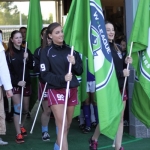 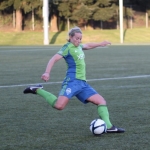 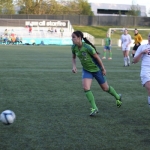 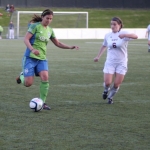