Seattle Reign FC faced off with FC Kansas City tonight for the second time in eight days. The Seattle Reign lost their first match against Kansas City. The atmosphere was full of excitement: it was the first home game for the Reign, perfect weather, and packed stands.

The game kicked off and you could tell the two teams knew each other very well. There were a couple of hard challenges to set the tone early. Each team was awarded a free kick within shooting range within the first 6 minutes of the game. However, neither team capitalized on those opportunities. In the 13th minute Seattle Reign’s keeper, Michelle Betos, had an amazing save to stop a volley that was sent to the far post corner of the net. Again in the 16th minute, Betos had a beautiful quick reaction, diving stop to save a sure goal; off the rebound a Kansas City forward fired in another shot, but it was cleared off the line by one of the Seattle Reign’s defenders. Kansas City put the pressure on early and forced some big stops from the Reign’s defense and goalkeeper. 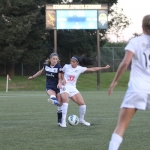 The intensity picked up and there were 2 yellow cards given to 2 different Kansas City players around the 30-minute mark. Immediately following the cards, the Reign created a great scoring opportunity from a perfectly placed through ball into the forward, Tiffany Cameron. She was not able to convert the opportunity into a goal. The game goes into halftime with a 0-0 score-line. Throughout the first half, Michelle Betos had a couple of huge saves to Seattle Reign in the game.

The second half opened up and it seemed that the Seattle Reign midfield was moving the ball around a bit better than in the first half. In the 52nd minute, a Kansas City player found herself with her back turned away from the goal around the edge of the box and decided to take a shot. She hit a turning volley that floated awkwardly over the defense and almost into the net – the crossbar came to the rescue. A few minutes later, Merritt Mathias whipped in a driven cross and Kansas City hit in a hard shot. Betos saved it again, this time comfortably. The pressure from Kansas City climaxed in the 68th minute and they were able to score a goal. After a couple textbook wall passes, Becky Sauerbrunn passed it in perfectly into Renae Cuellar around the penalty area and she was able to rip it into the corner of the net.

After the goal the Reign really stepped up the pressure and came very close to scoring an equalizer in the last 10 minutes. Even with some very well put together attacks they were just not able to find the back of the net. It was an intense, hard fought game, but in the end FC Kansas City took home a well-deserved win.